Film and TV  &  Sci-Fi and Fantasy

For most people Starship Troopers is a 1997 cult classic staring Casper Van Dien as the plucky Jonny Rico who joins military service right out of school all because of a girl and the fact he didn’t want to do what his father told him. Not many people know this story actually starts earlier and is a foundation of modern Science fiction. The original novel of Starship Troopers was first published in 1959 by Robert A.Heinlein, an American novelist who started writing whilst serving in the American Navy. Some of the ideas he created in Starship Troopers have not only been used and re-used by other writers, some have become real. In this article I will cover some of those ideas and show how Starship Troopers has influenced Science Fiction.

One of the most notable creations in Heinlein’s original novel is one of the biggest things that was left out of the movie, and that is the power armoured suits the troopers wear. These are the things that make the Mobile infantry mobile;

A suit isn’t a space suit – although it can serve as one. Its not primarily armour – although the Knights of the round table were not armoured as well as we are. It isn’t a tank – but a single M.I private could take on a squadron of those things and knock them off unassisted if anybody was silly enough to put tanks against M.I.

A Suit is not a ship but it can fly, a little – on the other hand neither spaceships nor atmosphere craft can fight against a man in a suit except by saturation bombing of the area he is in (like burning down a house to get one flea…)”

That is an exert from the book of Jonny describing the power-suits for the first time and it hits the nail on the head if you ask me. You can see how ever that this description can now be applied to a lot of different books and films that have come out, for example: 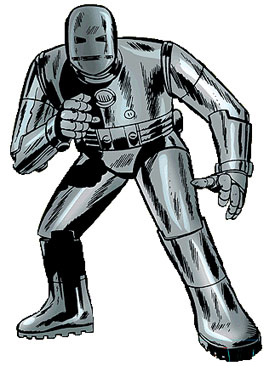 The description of the Space Marines.

Some thing quite interesting that could just be a coincidence with the Warhammer reference is that when the film was released in 1997 I cant help but thing the costume department got some inspiration from Warhammer itself! It’s a case of Art imitating Art imitating Art!

Concentrating back on the book over the years there have been hundred of literary references that could be tied to Starship Troopers but science fiction has really started to embrace its ideas in the last 20 to 30 years. For me personally one the most obvious direct references come in James Cameron’s 1986 classic “Aliens”. The Actors where all given copies of the book to read as inspiration and this shines though in the script as not only do the Marines refer to the operations as a “Drop” as the troopers do in the novel but they also refer to the prospect of a mission as a “bug hunt”.

“Is this gonna be a standup fight, sir, or another bughunt?”

This is actually an interesting quote as in the next few lines they are told they are going to be hunting a Xenomorph which seems to be something new to them, but that is another discussion for another time.

The last big series that has found inspiration from Starship Troopers has to be Halo. The most striking reference is going to be the power armoured super-suit that the Master Chief wears but for me, there is a force in that series that deserves more attention: the ODST (Orbital Drop Shock Trooper ).

An ODST emerging from his drop pod

Even though they don’t have the fully power armoured suit of the Starship Troopers, the ODST have incorporated one of the most intriguing ideas from the novels in modern science fiction, the Orbital Drop. Just as the Troopers in Heinlein’s novel strap themselves into a pod to be fired from orbit, the ODST seal themselves into a single use drop pod, using them to plummet to which ever site they are planning to take and just like in the book they hold that ground until re-enforcement arrives.

From the 1997 movie a multitude of sequels and spin offs followed, Starship Troopers 2: Hero of the Federation, Starship Troopers 3: Marauder and Starship Troopers: Invasion (more on that later). There was also the animated series Roughnecks: Starship Troopers Chronicles that started in 1999 and ran for 8 Series. This was a closer representation of the ideas brought to us in Heinlein’s original book as it follows a smaller squad of troopers, all in power armoured suits who drop into combat from orbit.

The series also includes the appearance of the “Skinnies”, an alien race of intelligent beings who end up going to war against the M.I who feature in the novel.

Starship Troopers Invasion is something I wanted to spend a few moments on, just for the fact I think its a bit of genius.

The dropship from “Invasion”

The dropship from “Roughnecks”

Released in 2012 with the backing of executive producer Casper Van Diem and directorial skill of Shinji Aramaki who is well known for his work in “Fullmetal Alchemist: Brotherhood” (2009) and the 2007 “Appleseed Saga: Ex Machina”. Invasion has done a very clever thing which I think may have gone unnoticed. Its been able to combine the characters and style of acting from the 1997 movie, with Van Diem re-playing his role as Rico and the rest of the cast being motion captured by western actors (something Aramaki was very particular about), some of the design ideas from the animated series which is most noticeable in the design on of the dropship seen at the beginning of the film and the power armour ideas from the book to create the best representation of Heinlein’s book to day.

Note the stomach armor in this picture. The design was copied from the Armour in the 1997 movie.

Earlier in this article I mentioned that some of Heinlein’s ideas had become real in our modern world. The most surprising of these is the power armoured suit. Two main developers are worked on “powered exoskeletons”, these are Lockheed Martin who have created the Human Universal Load Carrier (HULC) and the XOS 2 which has been developed by Raytheon.

As you can see neither or these creations are up to the task of taking down a battalion of tanks or even flight but the technology to greatly improve human strength is already foreseeable. Who knows how far we are from fully armoured suits?

I would like to finish with what I think is one of the more interesting quotes from the book. This is taken from almost half way though the story, Jonny is remembering a History and Moral philosophy class with Mr Dubois (this is also the opening scene in the film, the character changed slightly to be Mr Razak)

“’Law-abiding people’ Dubois had told us, ‘Hardly dared go into a public park at night. To do so was to risk attack by wolf packs of children, armed with chains, knives, home-made guns, bludgeons [……] the most vicious averaged somewhat younger than you here in this class…and they often started their lawless careers much younger. [……] they probably were not spanked as babies; they certainly were not flogged for their crimes. The usual sequence was: for a first offence, a warning – a scolding, often without trial…”

Now is it me, or does that sound like a kid getting an ASBO? Remember this was first published in 1959, and it kinda makes me want to sign up for the M.I.

As you can read, I am a proud Starship troopers fan and I do one day hope to own a M.I costume, I doubt it will be the fully armoured version but you never know. I originally read the book on a whim, not thinking much on it but I promise you its now one of my favourite books and I recommend any one to go out and read it. If your a fan of the films you are only going to discover more. If you though the film was a bit to satirical the book is a completely different view and I recommend you give it a try.

3 thoughts on “Starship Troopers: Would you like to know more?”

A Man for All Seasons – Bending genders, sexual politics and Heinlein

A review of space war saga ‘The Borsen Incursion’

Writer of old and new things in gaming

Passionate for gaming, movies, comics and all things geek

Contributor, Jack of All Trades